Via an Anonymous Source, Posted by Aubin Paul Solidarity Recordings 10 years ago

Solidarity Recordings has announced the first in a promised series of benefit compilation, this one benefiting the Plea for Peace foundation. The album will feature 30 songs from the likes of Cobra Skulls, The Brokedowns, RVIVR, The Methadones, Anti-Flag, Vultures United, The Menzingers, Sundowner, The Honor System, Fifteen, The Falcon, O Pioneers!!!, Hanalei and many others.

The album is due out September 28, 2010 and features artwork with your favourite winking political opportunist and rabble rousing mama grizzly who also shoots mama grizzlies. 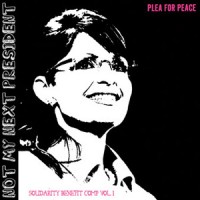