Tom May (The Menzingers) 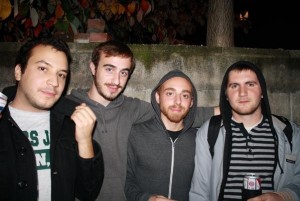 Buzz around a band can stem from a variety of places. It might come from a catchy-but-not-too-catchy anthem, embracing live shows or a lyrical and musical honesty that radiates far beyond anything less sincere in the sometimes-bleak punk scene. With The Menzingers, their buzz has come from all of aforementioned sources and it continues to grow louder with every EP and LP they release. Just before leaving on a long stretch of shows across North America, The Menzingers co-vocalist/guitarist and "whirling dervish" (as described by Red Scare Records' CEO Tobias Jeg) Tom May chatted with Punknews contributor Gen Handley about his affinity for Death Cab For Cutie lyrics and who to ask for if you're ever passing through Scranton, Pennsylvania.

Howâs it going?
Pretty damn good man…pretty damn good. Weâre about to leave on tour on Thursday and weâre going to be gone for a long time.

Youâre hitting the road withLess Than Jake, then the Swinginâ Utters and then The Gaslight Anthem, right?
Absolutely, and then Anti-Flag right after that.

So where does the energy to play this much come from?
Weâre just young dudes with no real attachment to anything, you know? Itâs something we all love to do - itâs the energy that comes from being just happy with your life. You get used to it after a while. At first, we were like, "Lets go get fucking wasted every single night and be ridiculous." - itâs not like that anymore. Weâve gotten into little habit-forming things like making sure you get enough sleep and get enough water.

Do The Menzingers manage to stay out of trouble on the road?
Legal trouble, yeah.

(laughs) What do you mean?
You can tell when a situationâs going to get hairy quick. Like, when some kid is spaced-out on acid and heâs telling you that thereâs a party somewhere, in a town you donât know and itâs two oâclock in the morning. You know when itâs probably not the best idea to venture there.

Yeah, common sense can be your most valuable tool on tour…
For sure man.

Are you a fan of the bands that youâre about to go on tour with?
I am yeah - definitely. Less Than Jake was one of my favorite bands growing up. We played with Gaslight Anthem in Richmond, Virginia a while back and in New Jersey before and I love their music and I like the new album a lot. Of course Anti-Flag was one of those bands we grew up listening to and we got to play with them at The Trocadero (in Philadelphia), which was a place I used to go see them all of the time and the 15-year-old version of me was so stoked about that. I like the Swinginâ Utters - used to listen to them a lot too. Itâs just really cool to get to know people who you look up to so much.

So what exactly is a "menzinger?" Where did the name come from?
I usually like to lie and come up with something ridiculous that doesnât make any sense, but itâs actually the phonetic spelling of a German word for "troubadour." I took an intro to music history class in my first semester of college and thatâs where I heard it.

Cool.
Itâs not the greatest name and it kind of sucks, but itâs who we are, so fuck it.

Do you see yourselves as a band of troubadours, traveling around, spreading the good word?
Yeah, thatâs what we wanted to do at the time. It was so romanticized and we hadnât done much touring. Now that were actually doing it, we love it - I actually feel more comfortable out on the road than at home.

This past year, youâve released quite a bit of music - the EP, Hold on Dodge, and then the full-length, Chamberlain Waits, which are amazing albums…
Thanks a lot man.

Why did you release the EP just before the Chamberlain Waits?
Because thatâs what we agreed to do with Toby (Red Scare Records). I think he wanted to test the waters with us maybe? We recorded the EP independently, Toby put it out and he liked it, other people liked it we liked it a lot. So then he decided to put out out the full-length and hooked us up - Tobyâs the best.

For Chamberlain Waits, we recorded it with Matt Allison - it was incredible because heâs recorded some of our favorite bands and he was the nicest, coolest guy. We did it in Chicago, which is much farther away than when we recorded Hold On, Dodge with Jessie in Union City. Everything just worked out great.

Why do you think that Chamberlain Waits has struck such a positive chord with a lot of people - especially those on Punknews?
I donât know. Thatâs a tough question to answer without sounding pretentious (laughs). For us, as a band, it was something that we worked really hard on. We had, in our heads and in our hearts, an idea of what we wanted to do. People seem to like it and we really like it and weâre very happy with it because itâs definitely the way we wanted to express ourselves.

How did you want to express yourselves through the album?
We just wanted to write heartfelt songs that were the best expressions, lyrically, of what Greg [Barnett] and I were going through and wanted to say. Musically, when we were writing it, everything just fit. Like, when we would play it, everything would just click and felt good. Thatâs the feeling weâre constantly chasing - that high.

You can absolutely hear that chemistry on the album…
Thanks dude. Actually, we used a computer program to write it all for us and just back and let it do it for us.

(laughs) Where did the Chamberlain Waits title come from?
We had a practice space in Scranton that overlooked a large arms manufacturer downtown. It was such an eyesore, but it employed a lot of people in the area. The idea of Chamberlain Waits is about regular, middle-class kids going to college, getting a job and become part of this system. Not just the military-industrial complex, but the huge consumer-driven culture weâre a part of and itâs all just waiting for everybody and weâre trying to escape it.

What was the experience like making the "I Was Born" video?
The video was fun as hell to shoot. We shot it over four days in New York, Boston and Philadelphia and we got a lot of our friends to be in it. We had this guy named Keith who followed us in a van for four days and compiled everything into the video.

What are your favorite songs to play off of the latest album?
I like playing them all live, but for me itâs a lot of fun to play "Chamberlain Waits" and "Tasker-Morris Station" - I enjoy those a lot.

Vocally and lyrically, who are your major influences? Who did you listen to?
When I first started singing and playing, it was definitely Green Day and Billy Joe Armstrong - even Blink 182 was an influence in shaping my voice. Of course Rancid was a big one when I was younger. I was and am definitely and hugely influenced by The Clash, lyrically and vocally - itâs really close to being a Clash rip-off. Lyrically, I get a lot from non-fiction and fiction reading. When I hear other bands mix specific, cool lyrics with emotional music sometimes Iâm like, "Oh my god."

Like Death Cab for Cutie for example. Those lyrics with the music are amazing when that guy isnât whining like…a little emo kid.

(laughs)
But itâs definitely The Clash and just a lot of different punk bands - but we also just pull influences from anywhere that we can.

Is that contributing to the song writing at all?
I would say so, yeah, definitely. When youâre in a van for like, eight hours, itâs pretty easy to finish an entire book. So then you start trading with other band members and then discuss the ideas in the books and that leads to writing.

Where do you scribble lyrics down?
In a notebook. Greg uses his iPhone and I want one them for that reason.

Whatâs key to keeping a solid-looking beard on the road?
A solid-looking beard? Finding a good trimmer and a comb to keep the mustache out of your mouth because Iâll constantly twist it, bite it and play with it - drives me nuts.

Last question, what do you recommend I do if Iâm ever passing through Scranton, Pennsylvania?
Get drunk probably? At The Bog or The Judge and Jury? There lot of nice parks too - Scrantonâs a good place.

Cool Tom - thanks for chatting.
No problem man. (pauses) Actually, can I add something to my last answer?

Of course.
If you ever come to Scranton, go to the Sun Hotel and ask for the man, One-Eyed Jack.