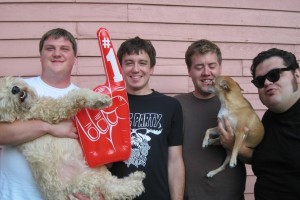 Elgin (not Chicago), Illinois own The Brokedowns are a busy bunch. Between scattered touring, writing a ton of songs and playing benefit shows and appearing on TV they find time to be, self described, terrible husbands." Luckily, Kris Megyery [vocals/guitar] also found time to sit down with Vic Ferro, of St. Fall Apart, to talk about all of these many endeavors and much more.

How did The Brokedowns form? This is a lame question but, is there any significance to the bandâs name?
Jon started the band when he was very young with different dudes and for whatever reason we just never changed the name. We also for some reason never broke up. The four of us have been playing together since 2002. There is zero significance in the name, but we do have a van that has a tendency to die on us in very inopportune moments. That usually provides incredibly clever people with wonderful senses of humor to make hilarious "The Brokedowns broke down," jokes . Which are usually about as funny as doing a Larry The Cable Guy joke in an Austin Powers accent.

You guys hail from Elgin, IL - a NW suburb or Chicago. I used to live in the suburbs of Chicago myself and Iâve been to Elgin. Itâs pretty lameâ¦except for the gambling boat and a couple of rad bands that have come out of your neck of the woods like Vacation Bible School. Any other bands from the âburbs we should be aware of? What are you guys listening to these days?
Lame? Surely you must be talking about a different Elginâ¦I think you were in Elgin, Iowa. Or you must have missed one of the many museums, historic landmarks, or you somehow missed the glorious mountain range. I think from now on to avoid confusion we are not only going to refer to ourselves as a Chicago band but we will refer to ourselves as the only Chicago band. Every band that claims they are from Chicago actually lives in Gary, Indiana. My favorite band with ties to Elgin right now is Wide Angles. They are fabulous. There are very few places to play out here right now so weâre at a pretty low point as far as bands goâ¦Not that our high points are anything to speak of.

The Brokedowns have a pretty unique sound. I hear underpinnings of Dillinger Four and I think Iâm detecting a bit of a metal and or hardcore influence. I ask this of all my interviewee victims so, apologies if itâs clichÃ© but, was there a specific band or show that influenced you guys?
We love Dillinger Four and a lot of older hardcore. Definitely no metal though. Except for Among The Living by Anthrax. That shit rips pretty hard. We were really influenced growing up by Chicago bands like Oblivion, Apocalypse Hoboken, V Reverse, etc. Those bands stuck out to me around here because you could never really pin down what they were influenced by. Lately we try to write songs that will be fun to play live. We used to not really think about that and now thatâs pretty much all I think about.

You guys recently played a show with OFF! which includes former member of Black Flag, Circle Jerks and Redd Cross. Those are some pretty accomplished dudes. How was the show? Weâre you guys nervous?
Yeah that was awesome. Keith Morris autographed my iPod. We actually were really nervous mainly because we literally hadnât practiced or played a show for three months prior to that. We got heckled by some yahoos but it was fine. Eric was selling merch at the end of the night and blacked out a bit. In the midst of his blackout someone stole most of our merch. I hope they liked it cause they definitely canât sell it.

Chicago has a few TV icons and Jerry Bryant from JBTV is definitely one of them. I grew up watching JBTV and I always thought it was cool that he profiled so many local bands (Naked Raygun, The Effegies, Local H, etc.). You guys recently did a segment on JBTV. How was it? Iâd imagine itâs kind of a cool experience for dudes from the Chicagoland area.
Yeah that was super cool because we all grew up watching the shit out of that show. I actually had the flu and when we arrived they let us know that itâs cool if we want to drink so we all ended up getting pretty drunk. That was for sure a terrible idea. I wish we could have played a little better. I also wish I didnât tell the story about when I was 15 on acid and freaked out at a Butthole Surfers show when I saw Jerry Bryantâ¦ But you know what? I just said that shit again, so how sorry can I actually be?

Speaking of Chicago TV icons, how bummed are you guys about the death of Lynn Hauldren (affectionately referred to as "the Empire Carpet guy")? Son of Svengoolie could have probably beat his ass though right?
He was pretty smart because for the last five years he has been in cartoon form on the commercial. He had too much pride in his craft to let us see him not at peak physical condition. Dick Clark and Kirk Douglas need to follow his lead. Iâm sure they have enough audio to keep the cartoon version of him alive and functional until the apocalypse. The only life left on the planet will be Cartoon Lynn, roaming the wasteland searching for petroleum-based products. Fueled only by the blood of Svengoolie.

Rumor has it youâll be playing one of the Bouncing Souls "8 Albums in 4 Nights" shows this June in Chicago. You have to be excited about that. Any other tour plans for the summer?
Yeah weâre doing that. I think the night we are playing is the night they play the two albums I am most familiar with, so that rules. We are super excited to test the patience of die-hard Bouncing Souls fans as they have to sit through our nonsense. Iâm sure it will be fun. We donât have any big plans for Summer I think we may do a short tour in the fall.

I did a little checking and you guys are all pretty young dudes, yet most of you guys are married with kids. Is it tough to balance jobs and normal home life while being in a touring band? Are your wives generally cool with binge drinking and multi-week tours (laughs)?
We are husbands and dads, but we are terrible at being husbands and dads. Thatâs how that works. When weâre home from our rigorous touring schedule we go back to our dead end jobs and our trailer parks and either beat our children or beat our dogs, or sometimes a combo of the two, depending on what kind of mood weâre in. But seriously… No, itâs not tough. We have pretty tolerant life partners and we barely tour at all these days anyway. We would like to do more but we usually just do weekends when we get a chance. Weâll probably do a tour this year some time.

It seems like there is a lot more musically diverse stuff happening in punk these days. Thereâs seems to be an entire subgenre of "folk punk" and "Americana" bubbling up and it seems like itâs giving the traditional hard, fast, loud recipe a run for its money. There are even a number of dudes on the road these days playing acoustic guitars that have proved to be some pretty amazing singer / songwriter types - Chuck Ragan from Hot Water Music, Jon Snodgrass & Chad Price from Drag the River, Kevin Seconds from 7 Seconds, Tim Barry from Avail, the list goes on. There was a time that you could be kind of a marginal musician or singer and get away with having a pretty decent punk band. Is the game changing? Is ability and virtuosity and musical ability overtaking the old formula of attitude and energy?
I would say virtuosity and musical ability were overtaking attitude and energy if dudes like Yngwie Malmsteen and Steve Vai were starting punk bands. But I donât think they would tolerate the sub par sound systems in basements and bars. Or the lack of righteous deli trays and cocaine that isnât 98% Drano. Fear not: your musicianship can still be marginal and you can still get away with it!

Your most recent full-length Species Bender was released on Red Scare in late 2010. When can we expect some new material from you guys?
We just recorded some songs for some splits this weekend. Who knows when those will come out? We actually have a ton of new songs written but no plans to do any recording as of now. We would also have to convince Red Scare or some other suckers to take their money and essentially light it on fire.

You guys recently played a benefit at the Bottom Lounge in Chicago to cover medical bills for Justin Sandberg who was hospitalized from injuries sustained while stopping an assault on a woman. Thatâs pretty cool of you guys.
Yeah, Justin is one of my oldest friends and he has the craziest stories you will ever hear. His life story is more chaotic than John McClane from Die Hard. Every time I see him he tells some amazing story about some crazy adventure he just came from where he narrowly averted death. This time he was minding his own business walking home from work and he saw a woman who was being severely beaten. He intervened and ended up almost getting murdered by four dudes and the woman he was trying to help. As a result he has a lot of permanent injuries and medical bills that are higher than Suge Knights bankroll in 1995.