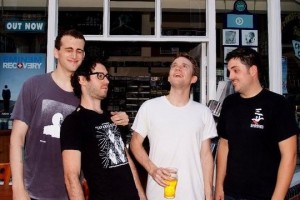 Cymbals Eat Guitars have unveiled a new track. "Rifle Eyesight (Proper Name)" will appear on the band's upcoming full-length Lenses Alien, due out August 30, 2011 via Barsuk Records (pushed up from the originally announced release date of September 13). Once out, it'll follow up 2009's self-released Why There Are Mountains.

Check out the song below.