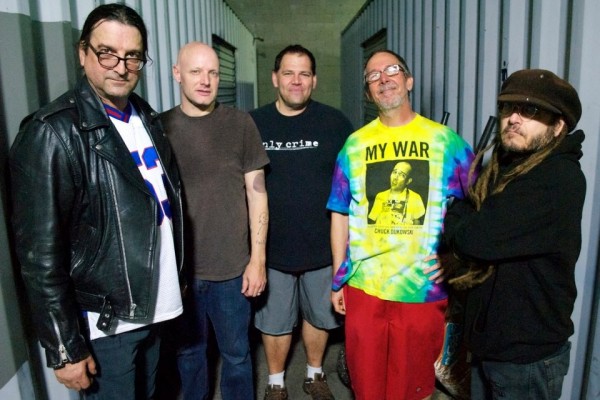 We'd been talking about bringing Dez [Cadena] in too, so we brought Dez in. I'm so looking forward to it - it's going to be great. Especially when I think of stuff like, there's a video of the five-piece band at Mabuhay Gardens, and it's just so powerful. And I'm looking forward to doing "My War" with the two guitars, which it was always intended to have. Some of these later tunes were designed to have an interplay between the two parts. And then we'll bring some of Dez's later stuff, too, that never really came out. Maybe we can do "Ain't No Time Here Now" - I know he recorded that with DC3.

Cadena joins the group as the 4th Black Flag member alongside Morris, Dukowski, Bill Stevenson, and The Descendents' Stephen Egerton. The group will be playing a handful of festivals beginning in April.

Flag is one of two recent Black Flag reunions; the other act, going under the simple name of Black Flag, features Greg Ginn and Ron Reyes.

When asked about the other Black Flag reunion featuring Greg Ginn and Ron Reyes, Morris replied:

We heard varying rumors, which, when it comes to Greg Ginn, there are some of us that could really care less. Normally, you don't talk like that about friends. But he's not a friend, so I could just go down a list of people that have sued him and people that have not received royalties. Henry [Rollins] writes a column for the L.A. Weekly, and he finally just said, "Hey, how about some accounting?"

He then goes on to describe the motive behind Flag:

The thing we're doing is not in spite of anybody – we're celebrating the fact that we're at the age that we're at and people still love this music. And we're still capable of playing it. This isn't about finger-pointing or "You did this" or "You did that." As all of this progresses, certain things will be revealed. I can't stand here and say, "Those guys suck." It's not like that. Ron's my friend. Whenever I'm in Vancouver, I hang out with Ron. Personally, I'm happy that he's doing it. If Ginn is capable of getting up there and whamming, jamming, sweating and grinding, more power to him.

As for the possibility of recording new music, Chuck Dukowski explains how there aren't any plans to do so:

That's not what we're trying to do. We're really paying tribute to our past. We're going to get out and rock the hell out of that stuff, and try to do it with the full intensity and emotional commitment that we always did, and was always so joyful for us to do it when we did it at the Civic.

You can read the interview in its entirety here

Tours: Matt Pryor (The Get Up Kids) joins the Revival Tour