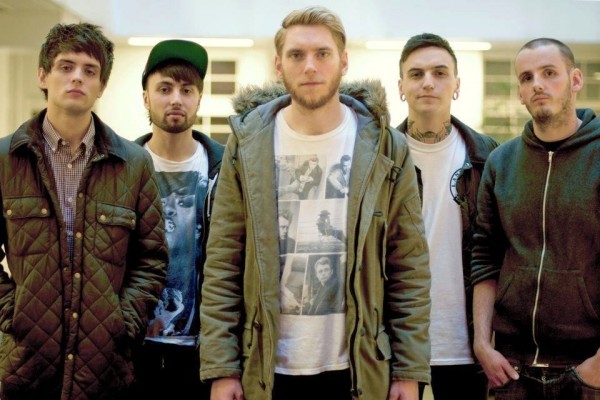 by Kira Wisniewski No Sleep Interviews 9 years ago

Departures have proven over the past few years that Scotland can produce a great screamo band in much the same way North American can. Having signed to No Sleep Records last October, they've begun to translate their grit onto the American landscape and Punknews staff interviewer Renaldo Matadeen caught up with guitarist Daniel Nash for a bit. With November's Teenage Haze receiving rave reviews, Nash was kind enough to shed some light on the band's transition to the US circuit.

How did you guys end up with No Sleep Records and how's life with them and their stable?

We were lucky enough to tour with Balance and Composure back in August and Bailey, their drummer, told Chris [Hansen, label owner] he had to sign us. Chris got in touch and we were obviously onboard straight away. Since we were already recording Teenage Haze, the timing was perfect. So far, it's been great. No Sleep has introduced us to a whole load of people that would never have heard us otherwise and we're really grateful for it. As for the other bands on the label, where to start? Touche Amore, Balance And Composure, La Dispute, Into It. Over It. - some of our favourite bands are on that list and we're honoured to be a part of it. We've done a couple of shows with Touche Amore and they are the nicest guys, we'd love to tour [with them] some more. Aside from that we'd love to tour with Taylor Swift. She might take us, you never know.

Following up When Losing Is Everything You Ever Wanted must have been a tall order but what inspired you guys during the making of this record?

With this album there was an underlying feeling of make or break for us as we've been a band since 2007 now and as people, we're not getting any younger. We've always been a band that has worked best under pressure and we had a ridiculously tight time-frame in which to write and record. That really pushed us, as we all work full-time jobs or go to university/whatever. Departures is just something we do in our spare time at the moment. Our sound has changed so much since we first began it's almost unrecognisable, but I don't think that's a bad thing as we've definitely done our best with this album.

"Those Miles Meant Everything" and "21" are really brilliant - so could you elaborate on what they're about?

"Those Miles" and "21," subject-wise echo each other's sentiments. "21" is about the feeling of being left so deeply affected by a broken down relationship that it stays with you for years, no matter how hard you try to shake it. "Those Miles" is on the same subject but could also apply to a friendship, not necessarily a relationship. People will take what they want from the lyrics but I'd say those two are probably the least cryptic on the album.

When we started the band (I'm fairly sure you can still find our early, early stuff online, although I wouldn't…) it was just a fast, heavy hardcore band. We wanted to start something like American Nightmare/No Warning/Comeback Kid, so we did. As I said our sound is so different now, we've all grown up both physically and mentally while being in this band and I guess it's reflected in the music we write and our influences. Hardly any of us listen to hardcore, or any heavy music at all in our spare time. Not that there aren't bands we'll always love but it's just the past to us.

A lot of comparison has been drawn to you guys sounding akin to Pianos Become the Teeth, The Saddest Landscape, Caravels etc. So how do you guys handle these comparisons and what, to you, sets you apart?

Well there isn't much you can do, people are always going to say "They sound like *insert band*" to give people an idea of what they're getting into. To be honest being compared to a band as good as PBTT is absolutely fine with us. Well I'd say what sets us apart is that we're not particularly influenced by hardcore music at all, but we're still in essence a hardcore band. If you took the vocals away, I think you'd struggle to place it.

There was a nice Defeater-esque sound to "Where the Time Will Go"? How do you guys go about balancing aggression/chaos and the calmer, melodic aspects of your music? What really drives you to hone and craft this balance and why?

"Where the Time Will Go" was written while we were in the mood to write a fast song. We've never really set out to do anything like balancing the tone of the songs deliberately, we just write and see what sounds good next. The songs come out the way they do, just because they do. I wish there was some intricate workmanship behind it I could go into, but we very rarely sit and properly plan a song out. Especially not this time around, we just didn't have the time.

Football fans? Rangers or Celtic? Who's better? Messi or Ronaldo?

We're not particularly big football fans, although James (vocals) and Andrew (guitar) support Dundee United and Dundee respectively. It has been known to cause tension. As for the latter, I'm going to step in with Messi, as Ronaldo is just awful isn't he? During one game at half time, he completely changed his hair style - incredible.

What records are you into these days?

What's next on the agenda?

We just need to tour. The fact that we're not touring our album right now is admittedly shocking but one of us has been in the hospital and we just couldn't. We will be out as soon and as much as we can next year, hopefully we will get to visit a whole load of new places. People that are into what we do - keep listening, tell your friends, come to a show and shout our songs at James!