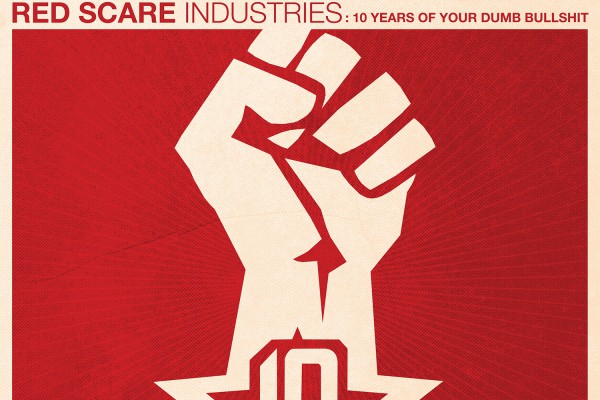 I always enjoy reading "track-by-track" things on other sites, so Punknews and I got to talking about it, and here we are. If you hate this shit, don't read it. But if you enjoyed the comp, I have some personal anecdotes and some weird insights to share, and it might be fun to listen along. I've said it a bunch and I'll say it a bunch more: it was super fun to put this compilation together for y'all and I'm super stoked that so many people have been enjoying it. Right fucking on.

You can pick up the comp here and/or stream it here. Red Scare's 10th anniversary will take place October 24-26 in Chicago, IL.

The Lillingtons - "Pyramids": I was truly shocked when I saw people asking me questions online if this was a leftover or a B-side. You think I could possibly sit on a Lillingtons song for EIGHT YEARS?! No way. It wasn't easy to get the band together for this and we had to transport people from three different states, but it was obviously worth it. I don't wanna bum out the band by revealing too much (since the Lils are pretty mysterious/secretive about their craft), but this song is sorta inspired by Matt Skiba's kooky, drunken tales about how the Freemasons and the Nazis built a secret space station on the moon. That, and Cthulhu. Far out, man.

The Falcon - "We Are The Bald": This is reminiscent of the songs from the very first Red Scare release: The Falcon God Don't Make No Trash EP. That was a total guerilla operation which was recorded in practice spaces and with equipment borrowed without permission. For this song I think BK and Neil used the practice space of a band called Dog & Wolf (some good friends), while Dan tracked his bass and vocals at his house. This was the final song added to the comp and I rode my bike over to Atlas to hear Matt Allison and Brendan finish mixing it. The very last thing they tweaked was to raise the "rock grunt" at 1:16. The Falcon is all about rock grunts.

Enemy You - "Adios (To You)": Like The Falcon and Lillingtons, EY hasn't recorded a new song in several years, so it was extra cool that they got back together to contribute a song and agree to play the show in Chicago. Although folks should know that members of Enemy You have went on to do stuff in bands like Nothington, Western Addiction and Dead To Me. EY has always been described as Lookout Records meets Bad Religion, and I suppose that applies here, but there's something different about it too. I guess it only makes sense that David (songwriter and frontman) has grown creatively in the years that have went by.

Masked Intruder - "I Don't Mind": Everybody loves the 'Truder, and this song totally jumps out. They've got some pretty bright production on this and it matches the peppy, catchy melodies that go with it. I really enjoy how Masked Intruder pours their heart out, yet as dim and uneducated crooks, they can't help but be a little crude with their romantic lyrics. "Some say to run away, but don't give a shit what they say." Prison poetry.

Nothington - "So It Is": At some point I think I've heard the Nothington guys describe their sound as Social D meets Leatherface, and I think that seems about right. Those are pretty good bands to draw from, but I know Jay has a bit of crush on Frankie Stubbs, which is kind of troubling. Anyhow, if you've never heard Nothington before, this song is a little more mid-tempo than most of their catalog, but it has the trademark vocal trade-offs between Chris and Jay, which in my opinion is what makes them great.

The Copyrights - "Oedipus Dill": The guys in the band were telling everybody that their song is the worst on the comp, meanwhile Brendan thinks it's the best song on the comp; so you decide. 2014 has been a banner year for the Copys, with a great full-length and some hefty tours logged in. I love their lyrics and their snarky vibe, but most of all I love that this song is 84 seconds long. A lot of bands surprisingly submitted three-minute songs for the comp which made it hard to sequence, but not these downstate hillbillies. They're like a strike force: get in, and get the fuck out. Then start chugging Lime-A-Ritas.

Cobra Skulls - "No Puede Mas": So if my information is correct, this is the last Cobra Skulls song ever. Sad, right? It's a bittersweet inclusion knowing that it's the last one we'll hear, but they're one of my favorite bands on the label, so it's great that we got a song outta them. You can probably surmise from the title that this one is en EspaÃ±ol. It starts out pretty exotic then finishes up with the harder-edged stuff you've come to expect from Cobra Skulls. That's one of the things I enjoyed most about the band: they were diverse and unpredictable.

Direct Hit! - "Bad Trip On Holy Ghost": Another song from DH! about us mortals living out our feeble lives in God's domain. I'm not sure if this is like an appendix to the story that was told in Brainless God or if Nick and the boys still have an axe to grind with the Big Guy upstairs. Either way, it was tracked in an afternoon while they were finishing up a tour, and I think it has that more raw sound that their early fans appreciate.

Teenage Bottlerocket - "TV Set": I'm not supposed to have favorites in this, but I think I like this one best. It's TBR, so you know it's catchy, but they also have the Kody-Ray vocal trade-offs that are pretty undeniable. I love Miguel's bass and I think it's a total airdrum song too. I especially like Brandon's double-hits on the crash. Thoughtful lyrics, and with all the sad shit taking over the news right now (Ferguson, Ukraine, beheadings, Ebola, etc.) I think it's pretty eerie timing.

The Brokedowns - "Ouija Jive": One of the things we wanted to accomplish with this compilation was to get people to check out more of the bands on the roster. Timmy V from The Lillingtons hit me up to say that The Brokedowns are his new favorite band on Red Scare. I like hearing stuff like that, and I agree that the song is pretty badass. It's got that Hot Snakes-y thing about it. We haven't announced it yet, but they will have a new record out in December.

Elway - "Chillswitch Engage": One thing I like about Elway is that they incorporate a bit of that Rocky Mountain twang in some of their songs, and this is one of those. I feel the roster has gotten more geographically diverse, and I think it's neat to hear those varying regional influences as you listen to the different bands. Tim told me one day, "I was up all night on acid and I wrote the song for the Red Scare comp. It came out real good." And so it was written.

Reaganomics - "Bite Your Tongue": I like the contrast this tune provides after the heaviness of the Elway track. After talking to lots of people who have heard this comp, I think this is the consensus favorite. It is pretty hilarious, and those dudes in the Nomix are complete rippers, as can be heard on this song. They tracked this song in an evening at Atlas and I guess if you're actually good at playing your instruments, you can do that kinda shit and still sound great. Bah, talent.

The Sidekicks - "The Wallflowers": Another change of pace in the tracklist, and this is Matt Allison's favorite one on the comp. It was left off the Awkward Breeds LP, and I remember Brendan saying it was his favorite song on the album when we first heard the mixes. So it's nice that it ends up here, and I think it's important that we have The Sidekicks on this collection because even though they don't sound like a pop-punk band or whatever, after three records on Red Scare they really are a part of our genetic make-up and their nuanced style of indie-punk provides a nice texture.

Druglords of the Avenues - "Drunkest Teen": Self-described as "Caveman Punk," Druglords couldn't possibly be more aesthetically different from The Sidekicks. I like what's going on here: drunk teens, St. Augustine, debauchery, etc. It's like MTV Spring Break gone wrong. It's also pretty cool to have Johnny from Swingin' Utters' voice on this collection. I'm a big fan.

Brendan Kelly and the Wandering Birds - "Gluesday Evening Blues": I'm not sure why BK and the Birds are so fixated on bums and transients (Hobo Core?), but I like the storytelling on this. From what I can tell, it's a day-in-the-life love story about a homeless couple. Lyrics about paying for your hooch in dimes, and "Somebody shut those fuckin' dogs up" provides some vivid yet dark imagery. Apparently Kody Lillington likes this song, so maybe he and Beex should go riding the rails together.

The Methadones - "Trip Wire": I had to personally reach out to Dan and apologize for burying this song! It is NOT easy to sequence something like this and still somehow get the side splits to fit on one LP, so that explains why this gem comes so late in the tracklist. It was short, so it had to go on side two. This song is a real stomper, and I like how it pays tribute to the Ramones in ways that others do not. Any band can do "Sheena is a Punk Rocker," but who can pull off the brooding stuff like "53rd & 3rd?"

Sam Russo - "Forever West": Last but definitely not least, we have Sam. A godless Englishman writing a song about… spirituality and Wyoming? Yeah. It's pretty awesome, and it tells the story about when he was on the Red Scare tour traveling through America's heartland. He really DID hang out with a guy on his horse at a 7-11 while the sun was rising. It was recorded the night before he flew back to England after he wrapped up the tour with TLA. We cabbed over to Atlas and he and Matt Allison took a couple swipes at it, and I think we kept the first take. Then we went and drank some beers. The end.