What we saw at the Riot Fest Side Show 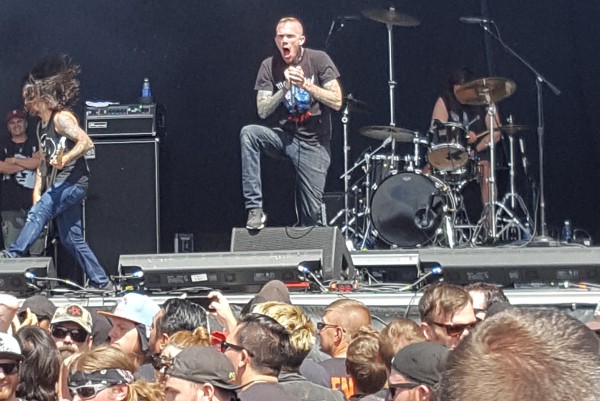 by Brittany Reiser Festivals 6 years ago

Riot Fest brought the Side Show and Rodeo to Colorado four years ago. In 2013, it started out in Byers, CO - a podunk town 40 minutes east of Denver, where the idea of a traveling circus came to life. Now in it's fourth year, and second rendition at The National Western Complex, Riot Fest has learned a few things about how to embrace Denver, appease the people attending from near and far, and most importantly, how to lure us in with nostalgia. 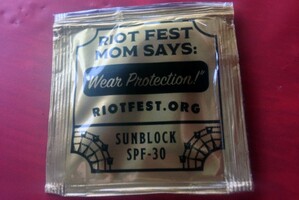 In 2013, when the festival started as a camping endeavor in the middle of a field, Riot Fest ran out of water on Day Two. It was 85 degree weather and endless sunshine. If you're unfamiliar with Colorado weather, we're a mile high in elevation, and our sun shines brighter than any California sun you could find.
I remember being impressed by Riot Fest's quick response to that crisis. You can't have thousands of people in the sun for three days and not care for them. They brought in pallets of bottled water and offered them for free.
This year, Riot Fest's learning is seen in branded sunblock packets. Using protection isn't just for avoiding STDs and pregnancy, it's also for your precious skin and well-being. 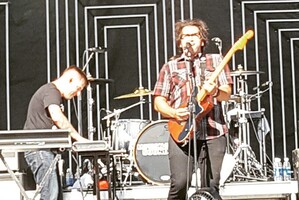 For what is supposed to be the final time in Denver, Motion City Soundtrack graced the Friday afternoon stage with their decade-old pop punk melodies. Pulling songs from their entire discography, Motion City did not disappoint the anticipating crowd. It was with heavy hearts that the crowd said goodbye to a scene staple at the close of the set. 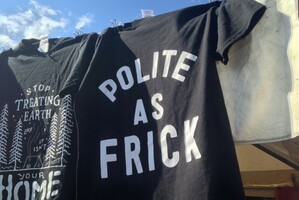 Riot Fest started as a small festival in Chicago where punk bands from around the corner or across the country came to play to an eager crowd. Now, the festival has spent the last few years carefully crafting wide-reaching line-ups. Naturally, this has brought some tension, do the same people that are ready to thrash to Converge or Suicidal Tendencies want to hang out with the crowd coming for Ween or 2 Chainz?
Whatever your preferences, you remained Polite as Frick. The entire weekend was full of friends reuniting at unexpected places, creating new connections with the surrounding strangers in the crowd and commiserating in the endless line for working toilets (who wants to use a Porta-Potty when you could use indoor plumbing?). The bands were no exception. All weekend long you heard artists talk about sharing the stage with some of their childhood idols. Like Jacob Bannon (Converge) and Adam Turla {Murder By Death| speaking about the Misfits in their original form. Or Geoff Rickly (Thursday) praising Suicidal Tendenciesâ€™ performance from earlier in the afternoon. 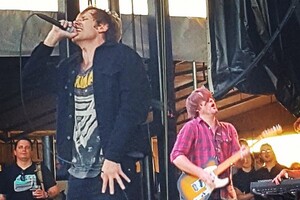 Appealing to our early 2000s' hearts, Riot Fest invited Thursday back to the stage. Geoff Rickly and the team did not disappoint the admittedly aging crowd as they took us back through the last 13 or so years. Geoff presented with his signature microphone swing move and screamed to us like he had never left. Minus the pause he took to comment on what altitude does to a bunch of Jersey boys, a convenient guise for taking some precious breathes. 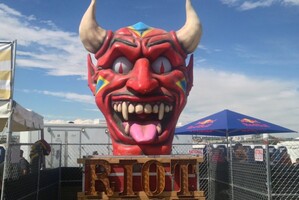 If you've been to any music festival at all, you've likely endured long periods of time where you have no interest in seeing who is playing. This time can either be precious, a perfect opportunity to refuel on food and booze, or a chance to stand in line for the bathroom in peace. Or, it can be an eternity in the sun with boredom weighing in. Not at Riot Fest Side Show and Rodeo though.
The namesake of the Colorado leg of this festival offers a unique reprieve to people watching when you're between sets. Though they skipped the carnival rides this year (forever missing the ferris wheel), the Freak Show was alive and well - and packed. Inside its own tent, you're invited back to a time we only read about in a Ray Bradbury book. The Freak Show tent highlight's the creativity behind Riot Fest in the most bizarre way possible. 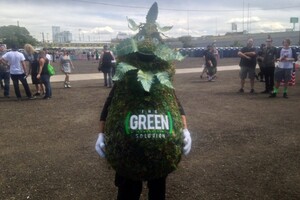 Let's be real, sure - people want to travel to see the original line up of the The Misfits, but they also want to enjoy that Colorado Greenery. While it's not actually legal to smoke weed in public spaces, that does not stop anyone, and certainly does not apply to grassroots (see what I did there?!) marketing efforts by the local businesses. The marijuana industry was out in force with their street team of give aways and costumed creatures. This can only continue to help Riot Fest as they return to Denver. 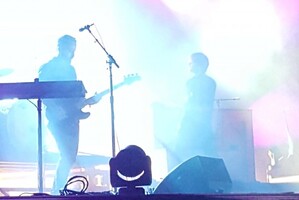 Remember how I mentioned that Riot Fest has learned to combine music from a range of genres into one festival, and how it brings out an odd collection of folk? Well, for Death Cab for Cutie I ran into my college roommate, a guy that is more involved in rock climbing than any kind of music. I met him in 2005, when â€™Plansâ€™ was being released. I remembered loaning him my copy of the CD and chatting about how â€Transatlanticismâ€ was so much better. Now here we are, 11 years later, watching the men on stage perform long-winded pieces, laced with intricacy and a lightshow to rival the biggest EDM acts as they travel through their large discography. Bringing people together, Riot fest. 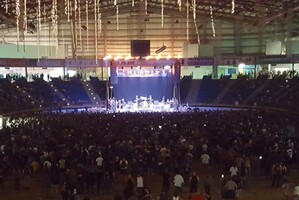 If you were going to Riot Fest for the punk rock, NoFX, Lagwagon, The Descendents, etc., then you probably spent a lot of the weekend in the significantly cooler Coliseum. The best part about Riot Fest Denver being at the National Western Complex is the incredibly large Coliseum building, where typically you see rodeo-styled events, not Joey Cape singing on his knees on a stage that looks like it doesnâ€™t belong. But with a ceiling to hide the sun, and seats to rest your aging backs, this is the place to be more often than not. As illustrated by a vast majority of attendees showing up for NoFX. 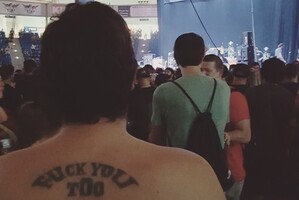 You might also be similar to this guy, or you know a person who embodies this bold FUCK YOU vibe. The old school punk rock fuck you. Standing without his shirt, waiting for NOFX to take the stage, this gentleman hung out with his friend, waiting patiently. His first impression was nothing like the aggressive back tattoo that greeted you initially. Pretty similar to punk rockâ€™s general philosophy, right? 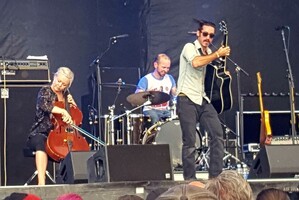 After Converge played an aggressive set with the 1:30 pm sunlight beating down on the moshing pit, the sweaty crowd moved from the Riot Stage, to the Left, the Roots stage to see a total dichotomy in styleâ€“ Murder by Death. Adam Turla enthusiastically greeted the crowd, recognized the diverse line up of Riot Fest and then played an even selection of songs spanning the bandâ€™s life. They had the fortune of stepping off stage just as large pellets of rain dropped from the sky onto the relieved crowd.