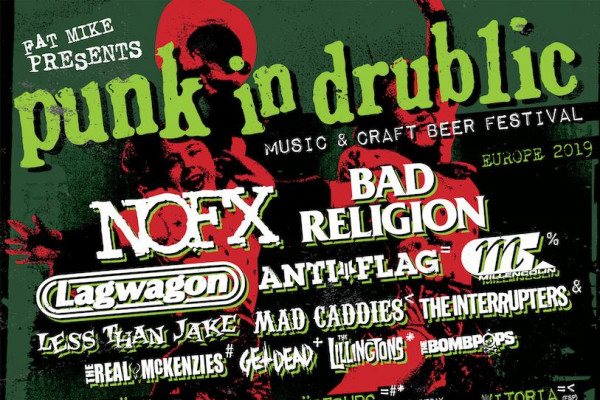 Last year, Stone Brewing Company and NOFX had a partnership where they released a Punk in Drublic beer and the traveling festival Punk in Drublic fest. However, that partnership crumbled when Stone brewing cut ties with Nofx and removed Nofx from the festival after comments the band made at Punk Rock Bowling 2018. Now, Nofx, sans any brewing partners, has launched a Punk in Drublic Fest that will hit 11 cities in Europe. The Festival appears to be directed by Nofx's Fat Mike himself.

The list of bands playing includes NOFX, Bad Religion, Lagwagon, Less Than Jake, and The Bombpops. On select dates Anti-Flag, Millencolin, Mad Caddies, The Interrupters, The Real McKenzies, Get Dead, and The Lillingtons will join the festival respectively as well. Punk In Drublic Fest Europe is scheduled to May 2019. You can see the list of dates below.