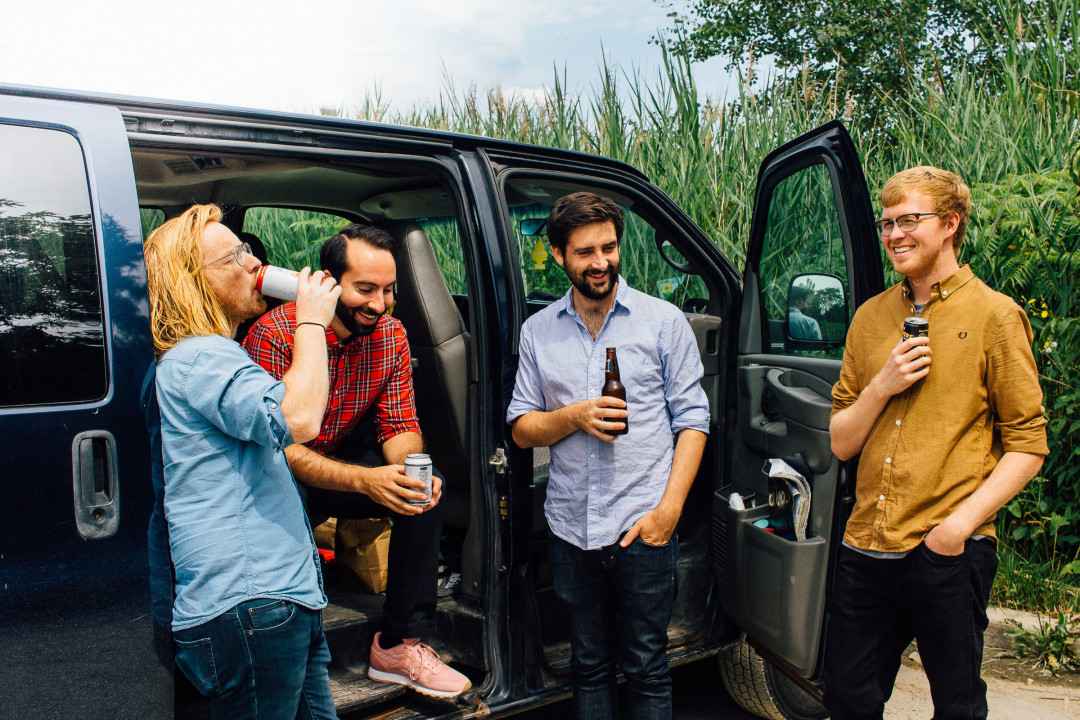 Toronto's Pkew Pkew Pkew are buzzing. The band's new full-length Optimal Lifestyles has been unleashed on Dine Alone Records, and fans are finding a striking emotional depth that the band's beer-soaked party punk only hinted at in the past. Writer Graham Isador cornered vocalist Mike Warne to chat about the album's themes, hopping record labels, the sage advice of Craig Finn, and more.

While Pkew Pkew Pkew built their name as a youthful party act – Here’s some songs about getting drunk! Here’s another song about ordering pizza! Don’t you hate your neighbours! – I also suspected that underlying their tunes were hints of an existential dilemma. How long can you keep partying for before the party stops feeling fun? And if partying doesn’t feel that fun anymore then…fuck…what else are we supposed to do?

It’s a narrative I’ve tried to impose on the band the various times we’ve talked. For their part they’d politely brush off the critique. They’d insist that Pkew Pkew Pkew wrote songs where you could sing-a-long the first time you heard them. They made the type of melodic skate-punk we all grew up on. It was meant to be extremely fun and kind of stupid. Nothing to take too seriously. I was reading too much into it.

For awhile I took the band at their word, but the release of their sophomore full length makes me think I was probably right about the existential thing all along.

Optimal Lifestyles still has the band’s nonsense staples. There is a song about the Patrick Swayze/Keanu Reeves joint Point Break. Another track talks about paying for public transit in nickels. The tunes are all short, guitar-driven, and catchy enough to earn some radio play. But when the band isn’t singing about buddy-cop movies or Toronto streetcars the biggest theme on the album is a fear of getting older. Tracks like "Everything’s the Same" and "Thirsty and Humble" explicitly talk about losing touch with friends and wondering why your plans didn’t turn out. And if any aging punk doesn’t find that relatable enough to jam along to then… I don’t know… they’re probably doing a lot better than I am. But to be honest I don’t know any aging punks who are doing that great.

Recently I spoke with singer Mike Warne about the new record, writing up-tempo tunes about feeling bad, and the various heavy hitters - including Craig Finn of The Hold Steady and local legend John Sharkman - who helped the whole thing happen.

Graham Isador: a running theme in your music has been anxiety about both getting older and trying to make money. Why write songs about that?

Mike Warne: Those are the things that keep me up at night. At this point, I’ve dedicated so much of my life to songwriting that it’s the best chance I’ve got at striking a balance between happiness and financial security. I’m not really qualified to do anything else. Sadly, or luckily, money has never been a motivator for me. I just want enough of it. And, the clock is always ticking. On the positive side, we’re getting closer, and there’s truly nothing I’d rather be doing.

Is it true “I Don't Matter at All” is about your dog?

Ya, I don’t "Matter" is about my dog, Murphy. She spent her puppy years, while we were working on this album, getting sick and going to the vet like every second week. Nothing serious, just lots of puppy stuff. She has been much more expensive than anticipated, but she’s on her best ever health-streak right now. Her highs are through the roof and her lows are just expensive. Nothing is really that bad. I think it’s important to talk about your lows, but try to avoid complaining about them because most of them are self-inflicted.

This fucking asshole just ate something that I’ll never be able to replace. Fucking asshole. pic.twitter.com/1005npF1eJ

When you signed to Side One we went and got Pizza Hut buffet. While that deal didn't go through the buzz around this record is pretty big. Is that something you're aware of?

We are, in fact, excited that the deal didn’t go through! We’re still working with the extremely talented Jamie Coletta, she was the big draw to Side One, but she has her own company now called No Earbuds. Now our label is Dine Alone, which is where I’d hoped to be when we first started the band. It was a long journey. We’re all really excited about the coverage that the album has been getting so far, and we can’t wait for the release. And, there’s lots more on the way. Buzz is Jamie’s job and she’s the queen bee. And, that is a great PR joke.

That is an okay PR joke. But it brings me to the next question, with that buzz does being in a band start to seem like a possible future with your current setup?

We have the right people working with us, no questions there. Now, we have to see if enough people will latch on to the album, maybe even buy it, and do our best to carve out a career, or a healthy portion of a career. We are all very excited to give it our best.

The excellent Uproxx article covered a lot of this, but can you talk about the impact Craig Finn had on the record?

Craig asked a lot of questions about the stories in the songs, which eventually led to their flow being more chronological and thoughtful. He added a few great lines, switched up some words, but mostly he tried to get us to think harder about what we were saying, and push us towards figuring it out. He also helped a lot with song endings. We’ve never really done anything like that before, and it ended up being really natural feeling and successful. I think, most importantly, it has given me a new set of songwriting goals for the future, and I’m really excited to keep moving forward with our sound and style.

Is that John Sharkman on the cover of the album? For those who are unfamiliar can you explain the legend of Sharkman and his importance to Pkew?

That is @johnsharkman on the cover. I really like scrolling through good friends old facebook photos when we need album covers. Sharkman is our uncle. We met on Twitter. We have a lot of the same friends now. He’s an amateur illusionist. He’s important to Pkew because he possesses the other half of the Mandarin Power Medallion.