OFF! working on new LP, new movie, and has new lineup 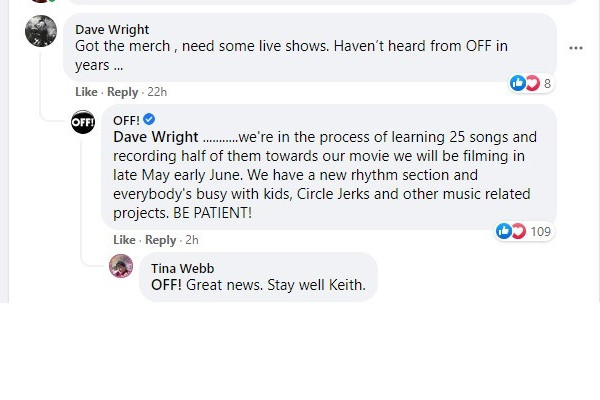 This weekend, OFF! posted some surprising news via the facebook comment section. The band recently closed their long running merch shop and opened a new one with a few designs. In the comment section of the facebook post announcing the new shop, the band, perhaps surprisingly, gave an update on the status of the band.

We last received an update from the band in May 2019 when their kickstarter to fund a movie called Watermeon, fell a frustrating $24,000 short of its $175,000 funding goal. (That particular kickstarter was organized so that if the band did not reach its funding goal, then no funds would be taken from any backers). Since that time, the band was relatively quiet. They played seven shows, with the last one being August 31, 2019 at Muddy Roots festival. Not long after that, Circle Jerks, which is fronted by vocalist Keith Morris, announced a reunion, which was delayed by the Covid situation. Recently, OFF! also quietly announced that they were on a 53 track Metallica tribute album.

Apparently, the band is back and up and running, with some modifications. Via the facebook announcement, the band is still working on their movie and planning to tour. (Presumably, as before, the movie soundtrack will also be made into an album). Apparently shooting is planned for next Summer. Equally interesting is that the band has a "new rhythm section"). The band was originally composed of Morris - vocals, Dmitiri Coats - guitar, Steve Mcdonald - Bass, Mario Rubalcaba - drums. As of now, it appears the bass and drum slots are held by new members, who have not been revealed. We will keep you updated. The band's last full-length was Wasted Years in 2014.