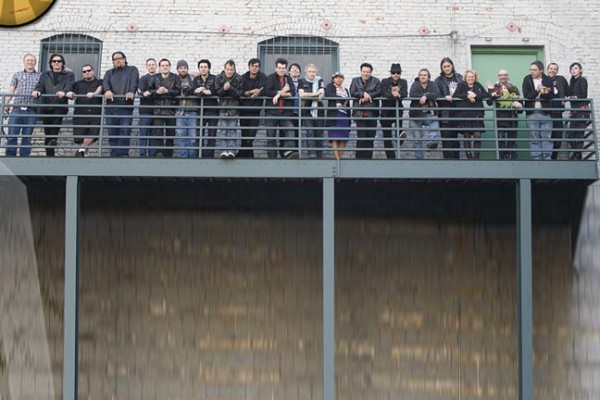 Photo: Selena Salfen
The T4 Project Story–Based Concept Album captures the spirit of a punk rock revolution in its powerful collection of songs, compelling background story concept, and the impressive array of musicians called together to collaborate on the idea.

But what exactly is The T4 Project– This is not just some group of all–stars that decided to put together a side– project album. This is a labor of love conceived by Shannon Saint Ryan, a young musician from Ventura, CA, who had the desire to bring together the people, ideals, and musical styles that span the diversity of the punk scene.

The result is a community – not a compilation – of like–minded artists, contributing their time and efforts for free, working together in the belief that music can still inspire and teach its listeners.

"We all sing about things that are burning in our hearts. Everyone is going against the grain in the same way," says Saint Ryan. "The punk scene is the foundation of the way I live and breathe."

The message behind The T4 Project is as personal as it is political. The songs and artwork address vital social and political issues, but the story belongs to both the individual and the community.

"I'd like this record to be a way for people to not feel lost," says Saint Ryan. "You just gotta' have some heart."

Just three years ago, The T4 Project was nothing more than an idea in its infancy, brewing in the mind of project founder and creative genius Shannon Saint Ryan.

At the time, few people outside of Saint Ryan's local punk scene had heard of him. Through a combination of DIY, dreams, and determination, Saint Ryan united pieces of a divided punk community, assembling a crack team of artists to begin working on the concept album to end all concept albums.

The roots of T4 formed when Saint Ryan's schoolmates, Mike Carter and Chris Campbell, enlisted him to play drums with their band for the school talent show. They introduced him to punk by giving him two CDs to practice to – Circle Jerks and Pennywise.

Saint Ryan fell in love with the underlying principles of punk before its sound. "At first I thought it was reckless abuse, crazy people," he admits. Then he picked up the liner notes and his world changed forever. "Punk is political and social movement through music. It... all made sense ... music as a weapon."

The trio continued to rock together as a band until a tragic motorcycle death claimed Campbell's life. Crushed, Carter and Saint Ryan disbanded.

After finishing school, Saint Ryan drifted, unsure about his future. "I realized I had to focus on one thing," says Saint Ryan. "Then, everything started to move forward .... I was able to put all that energy into music."

He started collaborating with old friend Kirsten Patches of Naked Aggression, revisiting the rough song ideas he had recorded over the years. The process clued Saint Ryan in to the incredible creative potential sparked by introducing a new musician's perspective.

After briefly touring with Patches' band, Saint Ryan left, hungry for something different. He started envisioning his concept album, then began a painstaking recruitment process, powered by his charisma and a polite yet fearless "don't give a fuck" philosophy inspired by Keith Moon, legendary drummer for The Who. Pg.1  T4_Bio_1.08

Saint Ryan would later call on Patches and Carter to join T4 as vocalist and guest bassist. Saint Ryan racked his brains to pick the other musicians, scouring over biographies, mentally compiling a roster of bands, and hitting up friends for recommendations.

First, Saint Ryan set about assembling the rhythm section. Drummer Trotsky of the Subhumans U.K. entered the picture when Saint Ryan and Patches, playing as Meet the Virus, opened for Subhumans (U.K.) in 2003. They lost contact, but Saint Ryan tracked down their tour manager and sent over a demo. A thrilled Saint Ryan heard back from the laconic drummer–"I got your tape, it's got some cracking tunes, and I'll put my sticks on it," he said.

Trotsky then recommended Spike T. Smith, drummer for Morrissey, Conflict, and The Damned. The two drummers together formed the perfect contrast in Saint Ryan's eyes. "Spike is just one of those technical wizards on drums," says Saint Ryan, while "Trotsky is ... that real hard, driving force."

Saint Ryan tracked down Bad Religion bassist Jay Bentley at a bar, via his band's tour manager. "I thought he was completely insane," laughs Bentley. Despite his initial skepticism, he never wrote off The T4 Project completely, putting in his two cents and four strings when called on, his incredulity eventually giving way to admiration. "I was really impressed. I'm proud to be part of it," says Bentley.

Exactly how Saint Ryan and Tony Barber, Buzzcocks bassist, met is a question of fuzzy memories on both sides. Saint Ryan remembers contacting Barber by charming Southern Studios into passing on his info. Barber just remembers receiving the e–mail, then the hour–long conversations that ensued regularly. "I was one of the people he used as a bit of a sounding board," says Barber.

Along the way, Saint Ryan scored a gig as a guitar tech for Strung Out, the California band fronted by Jason Cruz. Cruz eagerly joined the project as vocalist and lyricist, particularly because Saint Ryan represented a final connection to Jim Cherry, former bass player for Strung Out, who used to be Saint Ryan's neighbor and tragically passed away in 2002. "Shannon was the little punk rock kid that lived next door. He always had a lot of spirit," reflects Cruz. "He was just a talented kid."

Cruz hit upon the idea to add on a keyboard part during a recording session with Saint Ryan. Smith suggested Paul Roessler, a keyboardist with a solid history who currently tours with Nina Hagen's band. Saint Ryan looked Roessler up online, shot out an e–mail, and soon signed him on. "It brought something really musical out of me," says Roessler about being part of the project.

The T4 guitarists fell into place through a variety of different ways. The history with guitarist Fletcher Dragge also stretches years back, to when a young Saint Ryan, as a Pennywise fan, did some complimentary flooring work for Dragge. "I kept in contact with him over the years. He told me about The T4 Project and obviously, you know, he laid my carpet in my house for free, so I have to play on his record," deadpans Dragge. Beyond their shared past, Dragge loved the concept behind T4. "Shannon's heart is in the project. Blood, sweat, and tears ... everything."

Saint Ryan met Armand Tambouris, guitarist for From Satellite, during another mixing project. Tambouris had thoroughly impressed him with his technical proficiency on the guitar, so Saint Ryan pulled him in to playas guest guitarist.

Greg Hetson, the final guitarist to sign on, played for both Circle Jerks and Bad Religion, and caught wind of the project when he found out Bentley was recording in London. Hetson received the demo from Saint Ryan and, in the meantime, Dragge decided to drop Hetson a quick phone call. "He really lit a fire up under my ass to join," chuckles Hetson.

For Saint Ryan, one of the high points of the album was recording vocals with the Ventura College Choir. Saint Ryan contacted choir director Elizabeth Helms through a friend, and convinced her to participate. Hearing his story, Helms transformed her view of the project from a scary punk record to a story about redemption. "It's not out of bounds, it's creative license, and I have to be okay with whatever his viewpoint is," says Helms about the social and political stances on the album.

The future of The T4 Project has yet to be written, but regardless of how the answers unfold, everyone involved is thrilled just to see an idea so revolutionary come to life. The dark and powerful storyline on the resulting full–length, Story– Based Concept Album, ultimately has a positive message – inspire, celebrate, believe, and, above all, don't give up.