Tonight We're Going To Give It 35% 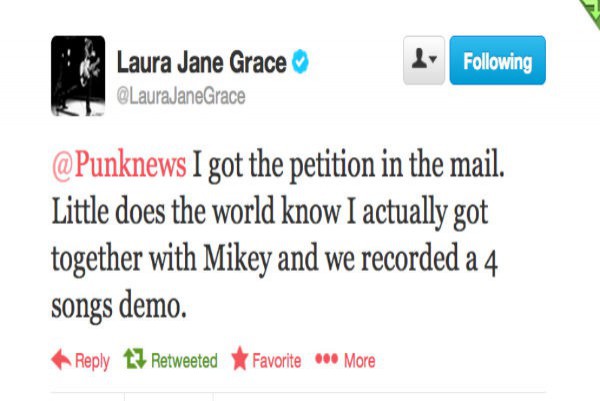 Punknews content is syndicated to a handful of your favorite social networks, including Twitter, Facebook and Tumblr. Join our Last.fm group and contribute your listening habits to our weekly charts. All of our high definition video footage can be found at Vimeo.

Here's your question and answer of the week from the Punknews Formspring:

Q: The threat, stigma, and general uncoolness surrounding the concept of punk has declined. The culture and music are now staples of the mainstream. Was punk rock co-opted by "the cool kids", or did it subvert the maintstream in a way that it became accepted?

A: This is an excellent and multi-faceted question. If I am forced to pick between these two poles, I'd say that you are more correct with the former. But as both Jacques Costeau and Ron Jeremy said, "Let's dive deeper."

I wonder if the concept that punk used to be about uncool people finding a place is ovestated. If you look at photos of old Sex Pistols, Clash, Ramones, Buzzcocks, and Suicide concerts, all those people look pretty cool. Really, I think the original punk rockers, or original punk fans, might have been more like hipsters than we'd like to admit. They're not "jocks," but they are people who have certain societal norms to which they all agree is the proper way to conduct oneself and thereby a way to look "cool", at least in their own eyes. I'd bet that even bands like Crass, Subhumans, and Flux all had pretty insular communities, just like crust/anarcho punk has today.

But, if we look at photos of Black Flag shows, Misfits, Dead Kennedys, Bad Brains, Reagan Youth, you see more people that look like "outcasts." Also, notice, that the audience is much more predominantly male. I'd argue that punk, generally, was originally a place of hip, artistic people, and then in the states, eventually became a haven for uncool boys. I'd even go father that for the most part, late 70's early 80's punk was the domain of boys that didn't know how to communicate with girls. While the "cool guys" were out on dates, the awkward boys were going to punk concerts.

You might say, well, where are all the geeky girls in late 70's/early 80's punk? My guess is that because the area was so dominated with awkward boys flinging off energy and testosterone that it wasn't a pleasant place for most girls.

So, I'm not sure that punk was always the place of the "uncool kids" though in certain time places and periods it did seem that way.

But, more to your question, did punk make the mainstream more palatable or did the mainstream water down punk affects for its own use? If we look and see that guys like david Beckham wearing Crass, Fergie wearing Black Flag, Chris Brown wearing Cro-mags, and Miey Cyrus wearing Motorhead, it definitely looks like the imagery, but not conceptual ideas, of punk have been taken by the mainstream for its own use. (I have no problem with beckham, fergie, etc liking punk rock and wearing that imagery, but I'd bet if you asked them about the bands on their shirts, they wouldn't know thing one)

Generally speaking, What the mainstream does is take edgier ideas and water them down to make its own fashion and ideas new….er. The mainstream took the biker look from hells angels, watered it down, and made the leather jacket cool. The mainstream took the outrageous clothing choices of John waters and watered them down with Madonna, and later britney and beyonce. So, it did with punk. You might see famous people wearing cro-mags, but I doubt that those people are zealously vegan and explore the concept of oneness. rather, they just like how the look looks. I'd doubt that the world is anymore in line with the ideals of punk rock now than it was in 1976. If it is, I don't think it's because punk has subverted the world, I think that the world is gradually becoming more "liberal" and in general, punk tends to be liberal.

Lastly, punk is less shocking because perhaps, conceptually, it hasn't grown too far beyond its original starting point. The Sex Pistols were incredibly shocking for attacking the queen, so that was a novel, new, and dangerous concept. Now every punk band there is attacks a president. it might be a valid statement, but its not new and people have grown used to it, so its not shocking. Also, due to the dispersal of information and globalization, its harder to shock people these days because we are more aware of atrocities than ever. It's hard to be shocked by Jello Biafra putting penis pictures inside an album sleeve when people are shooting up schools, bombing parades, and holding people captive for 10 years.

So, why is punk less shocking these days? Because punk is less new than it used to be, people have co-opted the imagery, but not the general concept, and also, because the world itself seems to be more shocking (though maybe that's only because we know about more things now, were info about terrible things used to be less dispersed less).

Despite all that, punk is still pretty great. I'd just argue for the younger generations interested in punk to keep an open mind about music and not be so quick to determine that someone's music is not punk, and to not be so quick to berate or attack someone for thinking differently. Also, think for yourself. It is so easy to fall into a group's mindset. Take a moment, step back, and think about the party being attacked or assaulted, and see if you can't see it from his or her perspective.

Again, I'll leave you with the words of Mr. Nick Blinko, not as an argument, but as something to ponder.

p.s. LEARN YOUR PUNK HISTORY. THE RAMONES AND SEX PISTOLS WERE GREAT PEOPLES.

Where else are you online? Share your links below and keep connected with the Punknews community.

Sunday Edition: The People Must Have Something Good To Read