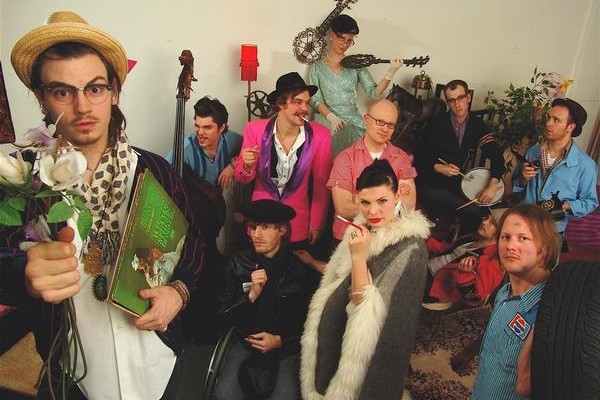 Seattle–based Kay Kay and His Weathered Underground is the lovechild of Kirk Huffman and Kyle O'Quin, and there's plenty of love to be had. Begun shortly after the announcement of Gatsby's American Dream's hiatus, Kay Kay was putting out good vibrations before the year was up, releasinga handful of tracks on cassette, and an intermediate live show compiled onto a two–disc, live DVD (shot in a fashion boutique) with accompanying CD, and they hadn't even made it out of Washington yet. Still, a copy of the DVD landed in the hands of Carson Daly, and after only few shows outside their home state, Kay Kay performed an abbreviated version of their song, âHey Momma,â on national television. Not bad for a band without a full–length!

If a cassette release is too retro for you, the band's eponymous debut was released strictly on vinyl, and in true Kay Kay fashion, 1,000 copies of the double LP, and the release party in Seattle, sold out before doors ever opened. It isn't just their production method that evokes the 1960s, though: Kay Kay and His Weathered Underground shimmers and soars like the greatest pop of that decade, with enough melody to lull songbirds into silence, and reverb to make your teeth chatter. Phil Peterson (cello, backing vocals), the third of the consistent members, lends his skills on strings to weave depth and darkness through the sunshine, and a revolving set of studio and live musicians (15 or so when all is said and done) round out the whole experience into an enormous orchestral affair.

The band is currently in the process of recording their second LP, and preparing the re–release of their debut, self–titled album to be released on CD for the first time ever on May 26th courtesy of Suburban Home. Look forward to new packaging for the vinyl, complete with new collages and a tri–fold design. At the end of 2008, Kay Kay hit the road with Rx Bandits and Portugal the Man for a jaunt down the West Coast, and this June they'll be out again for a handful of weeks, touring the U.S. with MeWithout You and The Dear Hunter.