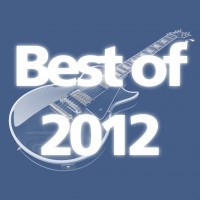 [Bryne Yancey is the once and future king of Punknews.org] After a productive 2011 at Punknews, I backed out of doing a year-end list because I was in the process of getting rid of everything I owned to move across the country for a job that, let's just say, ended up not working out the way I thought it would.

But hey, that's in the past now–frankly, it already feels like another lifetime ago–and I'm back to doing what I love: Contributing to a site that more or less shaped me as a music fan and critic, a site that's all about the music instead of advertising dollars or some of the other really dumb, politicky things that sometimes go on behind closed doors in music journalism.

It ended up being a blessing a disguise. I moved from Cleveland to Philadelphia (big upgrade) with no job and no money. Now I live in the greatest city for punk in the country, have a great full-time job that fosters creativity in a way that's unfamiliar and exciting, and a blossoming public relations venture on the side. I've never been afraid to fail at anything, and that lack of fear has done more for me this year than I could ever put in words.

As far as what I'll be bringing to Punknews going forward, it'll mostly be behind the scenes stuff like editing and social media strategy, but you'll occasionally see my name in our news feed, too. I'm thrilled to be back. Here are 20 albums I loved in 2012.

Cheap Girls have always been pretty good at the '90s throwback thing, but they really took it to a new level on Giant Orange. The production by Laura Jane Grace was a big help; these songs are louder, hookier and altogether more cohesive than anything else the band have done. Ian Graham has matured into a great songwriter, with lyrics that navigate around the depressed and often drugged existence so many of us have unfortunately been through. It's real and it's relatable, and it rocks.

Burning Love are brooding and dangerous. They spit hot fire at every turn on Rotten Thing To Say. Packed with huge riffs, sinister lyrics and pissed-off vocals, this record is a furious ball of energy that doesn't let up because why would it. I'm pretty sure I have almost crashed my car a dozen times while playing this album. Be careful out there.

Out of nowhere, the Fake Boys practically reinvented themselves, going from an average pop-punk band to a bonafide power-pop powerhouse. Pig Factory crunches in all the right spots musically and lyrically, keeping the hooks at the forefront of each song but ensuring they're never too sugary to digest.

Wolfbrigade haven't completely abandoned the traits that made them one of the biggest crust bands going, but what they did do on Damned is seriously up the metal overtones while essentially keeping the speed as blazing as it has been. The end result is a loud, thrashy, dirty record that's as fun as it is nihilistic.

Hop Along: Get Disowned

Difficult to categorize and impossible to forget. Hop Along are on their way up and had Get Disowned been released by a moderately-sized label with some promotion behind it, it would've been the biggest rock record of 2012. Frances Quinlan is a revelation as a vocalist, her range and emotion unmatchable in this genre. She's going to be a breakout star the moment someone important notices. Hop on the bandwagon now while it's still cool and underground.

There are a lot of reasons why, over the years, most of the trite "modern rock" bands Deftones are unfairly lumped in with have flamed out while they've only gotten better. Deftones' music has always had a different, more authentic feel to it; music that sounds like it's coming from someplace real, as opposed to being designed to dominate radio playlists, will always have more staying power. No band incorporates spacy, progressive overtures into heavy music–all with an underlying yet palpable sense of pain–and make it this accessible like these guys do. Some will say Koi No Yokan is Deftones' best work since White Pony, but time will eventually place it as their best work period.

Dear J. Robbins: Please, please start producing more metal records. Your style, which perhaps captures the sound of a band playing together better than anyone in our scene, is remarkably suited for riffs and mythical creatures. That's especially true for a throwback like the Sword, whose Sabbath-centric brooding has never been as punishing–or as fun–as it is on Apocryphon. For a guy that was a metalhead before a punk, it's a welcome addition to my collection.

Torche have never been louder, sludgier or catchier than on Harmonicraft. Their songwriting has improved, their musicianship is as impressive as ever, and as one of the last bastions of heavy music that's fun but not dumb, they're a formidable representative. Listen to "Reverse Inverted" and try not to bang your head. You can't.

Tortured indie-pop will always be better than breezy indie-pop. With Threads, Now, Now portray the ups and downs (mostly downs) of relationships, with a sense of tension that's perpetually palpable and a yearning that's never grating or hokey. That combined with huge harmonies, electronic tinges, and swirling keys all make this the pop record you should be listening to instead of the new Taylor Swift record.

If it weren't for Celebration Rock, Major would be the party album of the year. Fang Island take all the fun and ridiculousness inherent in most good rock ân roll and run with it; the end result is something that's so catchy, so weirdly captivating, so oddball, so endearing that by the end you're baffled as you hit the replay button. If Andrew W.K., Japandroids and Fang Island toured the world together, I'm pretty sure violent crime would cease forever.

Post-hardcore is difficult to navigate because of how inherently nebulous the term is. Colourmeinkindness is everything I love about the "genre," though. It's heavy and plodding and cathartic and vulnerable, and it's the perfect sonic representation of a young band that know they're breaking up. This could be the Water & Solutions of our generation, an album that might fall by the wayside due to an overcrowded pack of contemporaries and lack of promotion. Shame.

Todd Congelliere might be the most unheralded musical genius we have in the punk community. Fambly 42 is the first Toys That Kill record in six year and it's also their best yet; no other band does more with such an inherently austere aesthetic, these songs flying by in a sea of garagey guitars and poorly recorded drums. Mistakes are left in; there's no snappy editing or mixing here. This is exactly how a punk record is supposed to sound. Its purity in that sense may be its greatest strength.

Eight years is a long time between albums. One could argue that urgency doesn't exist in that sort of timeframe. Exister, though, puts that notion to rest rather quickly. This record is frankly better than it has any business being, with all the tautness, punch and anthemic heroics we've come to expect from latter-era Hot Water Music–or at least those of us who've accepted (and embraced) that there won't be sequels to Fuel For The Hate Game or No Division.

For a band that create such accessible music (and always have), the Gaslight Anthem have always been under more scrutiny than any other band in this scene. That scrutiny magnified with their move to a major label, but like every other move the band have made in their career, they handled it with aplomb–and with great songs. Brian Fallon continues to grow as a songwriter, seemingly finding a different, relatable (but familiar) way of exploring loneliness, pain and sorrow at every turn. That, more than the cult of personality that surrounds him, is the reason TGA continue their ascent.

The Menzingers: On the Impossible Past

There were plenty of hints of the Menzingers' dark side on Chamberlain Waits, but at the end of the day that record comes off as more triumphant than anything. On The Impossible Past, however, is an exercise in trying, an exhortation to be a better person when it's clear that being a better person would be the more difficult thing to do. That's something we can all relate to, and it's part of what makes this record so biting and arresting.

Joyce Manor: Of All Things I Will Soon Grow Tired

Nine songs, 13 minutes, not one single idea recycled. This whole record is one gigantic, beautiful risk. No one is writing morose, awkward, tortured pop songs better than Barry Johnson at the moment. His words demand the listener's attention and the musical twists and turns of these songs–whether it's a drum machine, a piano, a shoddy acoustic guitar recording or a skatepunk cover of "Video Killed The Radio Star"–keep us on our toes better than anything this thrown together ever should.

Luther: Let's Get You Somewhere Else

This record kills me. It's maybe the best balance of youthful exuberance and a weathered disposition I've heard all year. The lyrics, while plenty introspective, are never so dour that I'm left wondering why everything has to be such a giant bummer all the time. I love sad songs–we all do, whether we want to admit it or not–but it's always nice to have a hook to hold onto when things go south.

The days of supernova female-fronted punk bands never really ended, they just sort of ebbed and flowed as the scene evolved. Is Mish Way this generation's Kathleen Hanna? Her sharply revealing lyrics tackle warped beauty standards, drugs and bad decisions in a way that hasn't been this awesomely brazen in a long, long time. It certainly doesn't hurt that the band behind her follow suit, particularly guitarist Kenneth Williams, whose jagged riffs are never recycled, twisting and turning to fit the mood and delivery of Way's lyrics and vocals.

Jesse Michaels isn't as old as we think, but at 43 and two decades removed from the lightning in a bottle that was Operation Ivy, he's arguably more pissed off and unrestrained than ever. There's no other way to explain how, after an unremarkable EP, he's fronting a ferocious hardcore band in Classics of Love that, while unabashedly throwback, sound more vitally important than any other group in the genre today. Who knew he had it in him?

We'd lost our way. Rock ân roll was originally designed for catharsis, tailor-made to elicit the kind of uninhibited release no other genre of music can. Somewhere, it became less about escape and more about restraint and what could easily fit inside a concise, marketable box. The reason Celebration Rock hit so many different kinds of people so hard in 2012 is that it's pure id, pure exuberance, but not an entirely canned, dumbed-down listening experience. That, or because it's really loud and fun to sing along to.