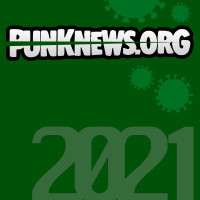 Another Year Down the Drain

2021 was a busy year at the Trauma house. My older son graduated from college. My older daughter is halfway there, and has moved out on her own. My younger son started his senior year of high school, and even my baby girl is a freshman. While I wouldn't say things are back to normal, they seem to be creeping in that direction.

After a 20 month pause, I started going back to shows in August. It was actually a pretty packed fall. I saw Sloppy Seconds four times, The Queers three times, and even the reclusive Boris the Sprinkler twice. I went to a great little weekend gathering in western Maryland called Savage Mountain Punk Fest, and finally made it to Punk Rock Bowling for the first time.

A few bands were even checked off the old bucket list. Zero Boys in their hometown of Indianapolis were a highlight. First times for Circle Jerks, Dr. Know, MDC, Youth Brigade and Youth of Today all came at PRB. I was also able to reacquaint myself with old favorites like ALL, Descendents, Devo, Dwarves, Municipal Waste and Submachine.

While full lengths dominated most of my buying and listening in 2021, there were a more than a few notable EPs. 45 Adapters started the year off with the excellent Now or Never 12 inch. Suzi Moon's debut EP Call the Shots went a long way toward restoring my faith in rock and roll. (Her live show is also not to be missed.) France's Fleau released a strong debut seven inch for the oi crowd. Born Shit Stirrers and LedZepVietCong made my favorite split seven inch with Overworked Underfucked. The Cheats and The Bollweevils both dropped noteworthy singles.

I bought a ton of vinyl this year. Especially during the long downtime between shows. It was a good mix of new stuff, reissues and old favorites. My top 20 of 2021 is a fair reflection of the year's listening habits. Lots of '90s style pop punk and classic '80s punk, with a little bit of thrash metal thrown in for good measure. My favorite album came out very early in the year, and stood up to all challengers for the next 11 months.

One thing that was tricky about this year was determining release dates. Some things may have been released digitally in 2020, but because of pressing plant backups, the vinyl didn't show up until 2021. I don't remember this being much of an issue in previous years, so I gave the bands and labels a little more grace than usual. As I say every year, I'm not necessarily claiming that these are the greatest records of 2021 as much as I'm saying they're my favorite. So, without further ado...

As much as I crave the familiar, it's important to acknowledge artists that push creative boundaries. Adam Gundrum is a guy who's making some very interesting music in small town Indiana. Pineapple is over 70 minutes of psychedelic grunge, weirdo folk and atmospheric soundscapes. A sometimes challenging but ultimately rewarding listen.

This is the debut album from a trio of Arizona and Tacoma scene veterans. Musically, Let Me Downs give a nod to the glory days of the Epifat sound. Lyrically, Tacoma is for Lovers is a breakup album. In the end, it's a well produced batch songs that you don't need to be broken hearted to enjoy.

The Monsters are a long running band from Bern, Switzerland. You're Class I'm Trash is their 8th full length, and their first in 5 years. They play a raunchy, nasty, caveman style of punk and roll that seems to resonate much more with European audiences. After more than three decades, The Monsters have become masters of ugly, noisy garage punk.

I just discovered 500 Miles to Memphis late this year, but have been trying to make up for lost time. This Americana punk band from Cincinnati pulls together a wide variety of influences for a surprisingly cohesive sound. Their last album, Blessed be the Damned was long on country and gospel. Hard to Love is closer to straight ahead punk. Digital is available now, vinyl next year. Might have been higher on the list if I'd had more time to listen.

Split District is a new project from some older dudes (this seems to be a recurring theme) from Wisconsin. It's some good solid punk and roll that probably deserved a few more listens, (another recurring theme?), but didn't get them due to my general aversion to streaming. Looking forward to spinning Invitation to Exile on vinyl next year.


15. Naked Raygun: Over the Overlords

After teasing us for several years, Chicago punk legends Naked Raygun finally dropped their 8th studio album. Two decades in the making, the record did not disappoint long time fans. While never quite reaching the lofty heights of their very best work, Over the Overlords still finds the band in fine form.

Teenage Bottlerocket are one of those bands with an almost AC/DC like consistency. Love it or hate it, you're almost certainly going to get exactly what you expect. The band has had a rough couple of years, but they continue to bang out top notch three chord punk.

When Face to Face is at their best, they're one of my favorite bands. Several of their records still get tons of spins at my place. For me this probably sits in the middle of their discography, but it's a very good album. If this really is the end, No Way Out But Through is a strong swan song.

Another batch of oldsters, this time from Chicago. These guys play classic pop punk in the style of Screeching Weasel, The Queers and The Lillingtons. Last Call For Adderall is among the very best sing along records of 2021. Capgun Heroes prove that you don't need to reinvent the wheel if you do something well enough.

Somehow, World At War is the only metal record on my list.* It was kind of a slow year for the type of classic thrash that I enjoy, but I'm thrilled with these young guys making Slayer and Suicidal Tendencies inspired crossover thrash. If the loss of Power Trip still stings, check out Dead Heat.

*The new Exodus record also deserves a spot on my list. Unfortunately. Persona Non Grata is not on Bandcamp. Since I'm technically inept, I didn't want to mess with a work around.

Ministry managed to tap into their best era with their new album. Moral Hygiene echoes The Land of Rape and Honey, The Mind is a Terrible Thing to Taste and Psalm 69. I know that Ministry have been all over the place for more than a decade, even if there have been occasional moments of genius. I get it if you've given up on Uncle Al and company. That being said, it's time to check back in. It's 2021, and Ministry are still relevant.

This was bound to happen at some point, but 2021 was finally the year that brought us a full album of The Queers covering '60s songs. The Beach Boys, Jan and Dean, The Who, Paul Revere and the Raiders, The Sonics, The Monkees and more received the punk treatment from Joe King and the rest of the current Queers. This might not be an artistic triumph, but it's a lot of fun to listen to. Isn't that the bottom line?

Kalamazoo's Zoanoids are one of the two Michigan bands to make my year end list. A couple of their songs even celebrate (or celebrate loathing) the Great Lakes State. Their self titled debut is a fun horror and sci-fi adventure that should help heal the wounds of those still mourning The Lillingtons.


7. Plizzken: ...And Their Paradise is Full of Snakes

Plizzken is a new German band fronted by Sebi Stomper from oi greats Stomper 98. His first record entirely in English is straight up killer punk. It's angry to begin with, but that German accent adds an extra element of aggression. This one probably flew under a lot of people's radar, but it's got some of the best punk songs of 2021.

I love the Descendents. The old and the new. 9th & Walnut is a bit of a novelty, but listening to Milo's voice strain like it's 1982 is a real treat. The Descendents/ALL tree has quite a few branches at this point, and ressurecting the sort of crude original lineup was an idea worth pursuing. While it's no Milo Goes To College, this record is pretty much guaranteed to bring a smile to any Descendents fan's face.


5. Dealing With Damage: Ask the Questions

Amazing, varied record from a bunch of UK punk veterans. Dealing With Damage are probably one of the best bands that you've never heard of. Ask the Questions encourages you to think without telling you how to think. That's what punk is supposed to be all about.

Geoff Palmer has played with punk heavyweights like The Queers and Nobodys, along with a bunch of other bands. That being said, this is the least punk album on my list. It's Americana and power pop, and it's as catchy as anything 2021 had to offer. Charts & Graphs channels The Dickies, The Replacements, The Pixies and even the late great John Prine. Fantastic album.

Bad Assets are an underrated street punk band from the vast wasteland of Detroit. Ghosts of Old Detroit is their 3rd full length.* These guys have been one of my favorite Michigan bands for quite a few years. While they're fairly Detroit-centric, I'd love for more people to hear them outside of our home state.

*Ghosts of Old Detroit seems to have disappeared from Bandcamp, so I attached their excellent 2nd LP On Trial instead.

In 1984, Oxnard's Stalag 13 made a brilliant EP called In Control. 37 years later, with 3/5 of the original lineup in tow, the Nardcore legends followed it up with the nearly as brilliant Fill In The Silence. It revisits the past and points the way to the future. This is a great record that spans the eras.

I loved this record when I first heard it in January, and I loved it when I listened to it yesterday. Kings established its #1 spot early on, and no band was able to top it. It doesn't ignore the multitude of problems we face, but still somehow feels celebratory. Antagonizers ATL are street punk and rock and roll and I can't stop myself from singing along. Just go listen to it!

I know I've been saying it for a couple of years now, but this will almost certainly be my last Punknews year end best of list. After over 500 reviews, come January 1st, I'm going cold turkey. I can't tell you how much I've appreciated your support over the years. I'd also like to thank the Punknews crew (especially John and Adam) for the opportunities and good times. I've formed some amazing friendships through this silly gig. You can keep up with my adventures and/or reach me at the Punk Till I Die podcast. Smell ya later.